Initially I intended for this blog to be only a place of positivity however, life isn’t always happy and perfect and tragic things do occur all over the world and I think that as good humans its our responsibility to  feel sorrow when we learn about tragic events. 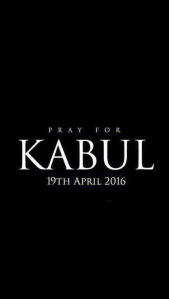 Yesterday, a group of barbaric terrorists created chaos in my parents hometown, Kabul, Afghanistan, by detonating a car filled with explosives. Although they were targeting supporters of the government the majority of the victims were civilians including women and children.

Honestly, some of the images that I saw were just so tragic they included injured children and even a tiny toddler covered in blood. Other images showed a river of blood.Thus far, 64 people have died and more than 300 have been injured.

One of the things that gives me pain is that this tragedy did not receive nearly as much media attention that the recent attacks in Belgium received. Please don’t misunderstand me I was in deep pain after the attacks first in Paris and then in Belgium.

However, I truly believe that all loss of innocent lives is a tragedy whether that be in San Bernardino, Paris, Istanbul, Belgium, Kabul or anywhere else in the world.

I  understand the point that these sorts of attacks are more common in Kabul and in other Middle Eastern or Muslim countries that’s why its not as shocking as the recent tragic events that occurred in San Bernardino, Paris, and Belgium however, aren’t they all equally tragic when innocent lives are lost?

I am hoping to see a day when the media treats all lives equally.

Anyways, thank you for bearing with me through this sad post I promise you that the majority of my blog posts will be more positive 🙂